So I think I have an ‘Only Bunny’
~ Andrea “Dre” Litzhoff

My English Angora, Chip, is a very unique boy to say the least. In total, Chip has been introduced to three potential mates. Failing to bond with them, I, his mom, have wrestled with guilt and struggled with unanswered questions regarding his stag lifestyle. I wonder: is he lonely when I am at my 9 to 5 job? Am I being cruel or negligent to him by failing to provide him with a companion? If my Chippy wasn’t bonded, could he ever truly be happy in just the company of humans? I am coming to grips with the fact that I may have an only bunny, and would like to share some insights learned from my potentially confirmed bachelor. 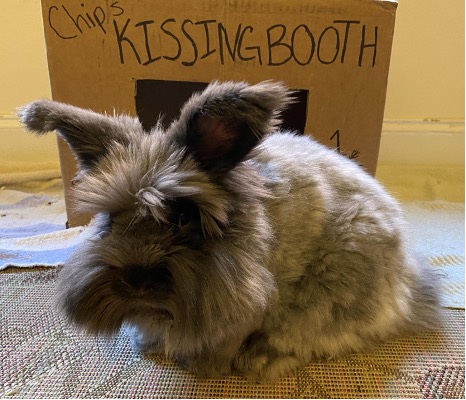 In regards to his sociability, Chip has a few traits I would like to emphasize first. He is the man of the house, free to roam where he pleases,, and aware of all comings and goings. He is more ‘high strung’ and territorial than any other rabbit I’ve had. He’ll leave territorial poops if he feels like his space is being encroached upon. He’s quicker to grunt and thump than my previous rabbit. At Binky Hours, I noticed he tended to hang out with a few humans he liked, be more aloof, unsure of himself, and awkward around the other rabbits. He liken him to Bigwig from Watership Down – strong, stubborn, and gruff. To a similar degree, he’s equal parts loving, silly, and sweet, following me from room to room, showing me he is content with his binkies. He loves humans, his grandparents in particular, always submitting to long massages.

He was introduced to Bachelorette #1 before I met him. His first human family wanted to bond him with their bunny, but when that didn’t work, he was advertised on Craigslist as “Free to a Good Home”. I saw the beautiful gleam in his eye, and the next thing I knew, he was mine. 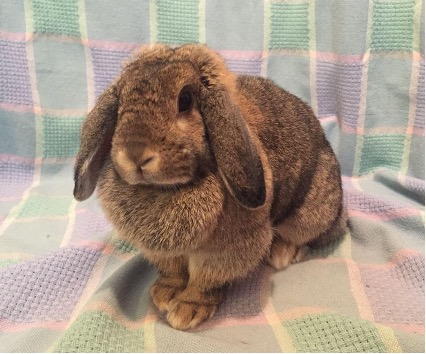 Bachelorette #2 was my second BUN foster, Sophie Valentine, a gorgeous agouti mini-lop. My household comprises just myself and Chip, so I have been fostering with the hope that I could bond a friend with Chip. Chip and Sophie went on a handful of dates in my kitchen. When they went on dates, he would hump her right away and lick the top of her head and she would obligingly submit. When he would grunt or drop a few poops to mark his territory, I would end the date. Maybe I misread their dance, unsure if the date was going well or not. Sophie seemed easier for me to read than Chip in the way she put her head down or curiously approached to sniff his butt. Unsure if they could ever fall in love, I brought Sophie to a Binky Hour where she had an instant connection with a handsome lop named Nugget. Seeing how simpatico Sophie and Nugget were with each other planted the seeds of doubt in my head about Chip’s suitability to be bonded. But I still wanted to try again. The summer of 2021 brought us… 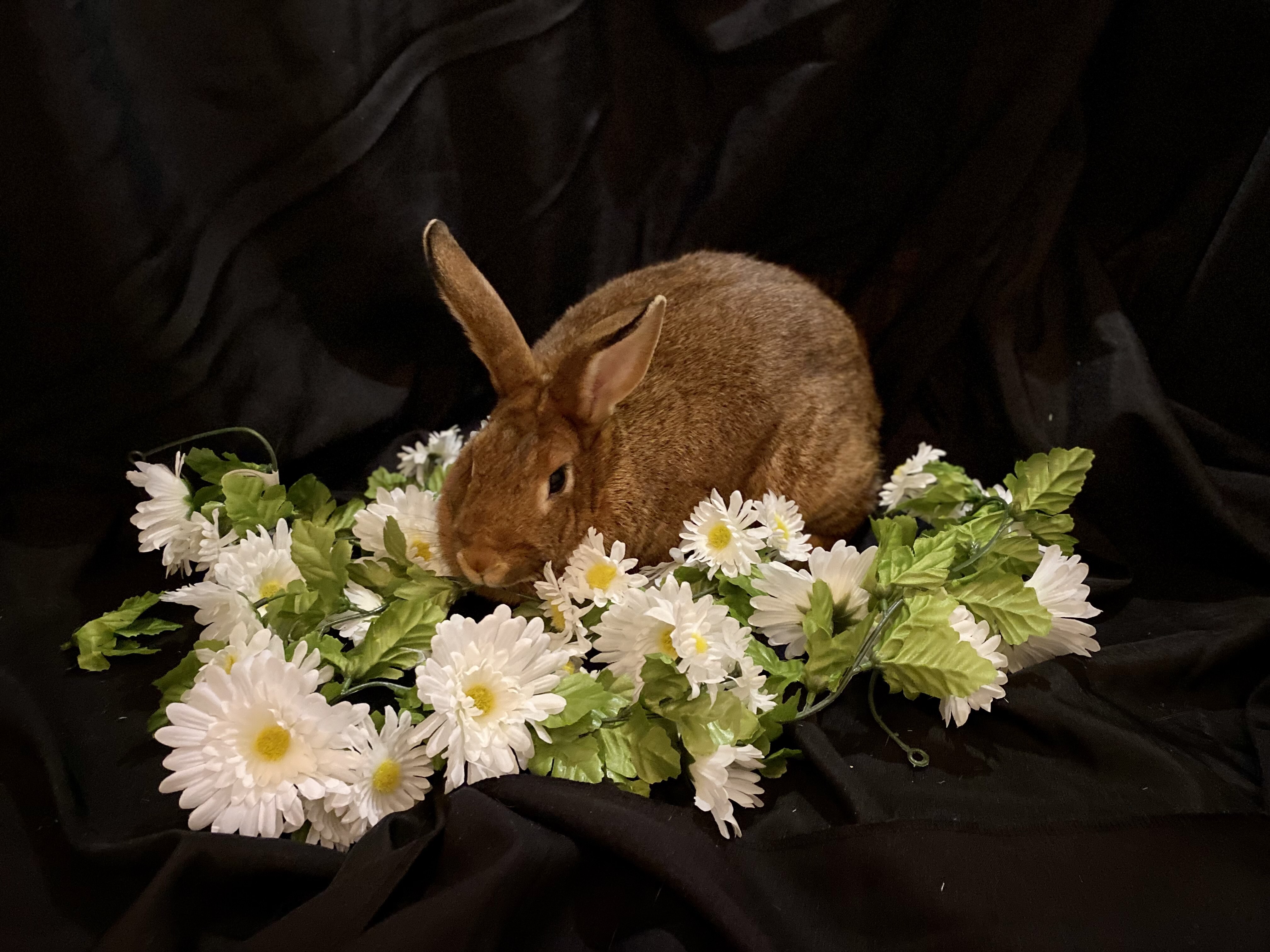 Bachelorette #3 was a my third BUN foster rabbit, Daisy Buttons, a large New Zealand with an incredible dewlap. Daisy came to live with me after some time at another BUN member’s house. While coordinating Daisy’s transition to my house, Daisy’s rescuer and I discussed our two boys. I learned that she too had a territorial bunny who seemed a lot like Chip. Right away, I could tell Daisy was very smart and social. I created a boundary between her space and Chip’s with an ex-pen to ensure they could know about one another but never physically touch unless under my supervision. She showed a healthy inquisitiveness toward Chip, but he appeared to be wanting to get at her, the stranger in his house, occasionally trying to nip her through the bars of the X-pen. I had less hope for Daisy and Chip than I did with Sophie Valentine. They went on two dates. He humped her and I had a hard time trusting him when his face got to close to hers, afraid he would bite her. She was adopted quickly and lives in Madison with her husbun, Irwin, and forever family. Her new mom had bonded bunnies before and was confident in her own abilities. Watching how she interpreted Daisy and Irwin’s kitchen courtship, I learned that I had been misinterpreting cues and behavior from Chip’s previous dates.

After three lovely ladies, Chip is still going stag. I used to carry a lot more guilt about not finding him a friend. I would think about his solitude and the happiness he wasn’t having without another friend in the house. It’s printed everywhere in our bunny community – rabbits are social animals happier in a bonded pair. In the wild, they depend on one another to alert each other of predators nearby and form social hierarchies by grooming one another. No one ever really talks about when they don’t bond. We want to give our rabbits the happiest lives we can. When I could not provide Chip with the textbook solution to a long, content house rabbit life, I couldn’t help but feel disappointed in myself and my abilities.

I have walked away a more wizened bunny parent from all these interactions and have learned a few lessons:
1.  It’s important to have an experienced bonder who can provide guidance to a nervous parent about the complicated and delicate dance of rabbit courtship.
2.  Not all bunnies bond super easily. Some take a long time.
3.  Some bunnies never bond.
4.  Some bunnies are happy with their human companions, as long as they can get plenty of attention. I think this applies to Chip, because he and I are definitely a bonded pair!
5.  All rabbits have different personalities. Chip is happy to be the only rabbit being spoiled and doesn’t like other rabbits being near his stuff. From Binky Hours to bonding, he’s shown me how he is a “human’s bunny”, and not so much a “bunny’s bunny”.

Going forward, I will have different expectations for myself and Chip. We will foster another bunny again and I will try to bond him again. It may take much longer than just a few weeks or a month for him to bond. Even if he fails to successfully make a friend, the interaction is good for him. But I won’t have any guilt about his solitary lifestyle choice. He’s bold, singular, and incredibly loyal, and if he’s happy as an only bunny, then so am I.S